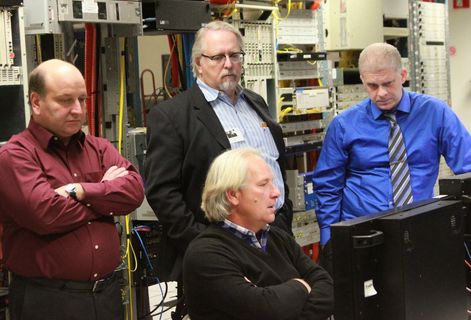 “With this successful demonstration, The Switch has illustrated that the ICOD network is ready for 4K immediately,” said Scott Beers, Chairman and CEO of The Switch.  “The ICOD network now provides remote program producers the ability to transmit 4K from all of our major league sports and entertainment venues.”

The Switch worked in close coordination with manufacturers Sony and Astrodesign, who contributed new 4K sources, record/playback and monitoring hardware.  The demonstration consisted of 3840×2160 60p Type-B 4K video content, provided by a Sony 4K U-HDTV camera, as well as an Astrodesign HR-7510 uncompressed 4K SSD recorder/player originating in New York.  The camera segmented the source content into four x 3G video quadrants, each of which was converted to Type-A 4K format using Astrodesign model SD-7070 4K interface converter.  The Astrodesign player provided an alternate source of pre-recorded 4K content.  The four source quadrants were then compressed using Net Insight JPEG2000 encoding of the 3G signals before they were routed via the ICOD network.  With the new Net Insight 4K software installed on the network, The Switch then internally synchronized all of the quadrants to present a uniform signal at the receive site.

The signals travelled over 14,000 miles, initially to Los Angeles and then on to Miami, London, and ultimately back to New York, where they were decoded at The Switch Network Operations Center.  The reassembled 4K signals were displayed on advanced 4K monitors provided by Sony and Astrodesign.

“This was the first transmission over the ICOD network of low latency JPEG2000 compressed quad handoff 4K 60p video at these distances, with first-ever field use of the Net Insight software with internal quadrant synchronization ” said David Anderson, Chief Technology Officer, The Switch.

The successful demonstration of its 4K offering adds an additional component to The Switch FIVE NINES Service.  Launched in early 2014, The Switch FIVE NINES Service offers 1+1 protected transport of Uncompressed and JPEG2000 HD, SD-SDI, ASI, 3G, 4K, as well as Ethernet connections paired with on-site telephone and internet connectivity at over 120 sports and entertainment venues, rights holders and customer locations throughout the United States and Canada.

With Success of NBA, NHL Seasons Behind Them, The Switch Looks Forward to MLB,...
Scroll to top