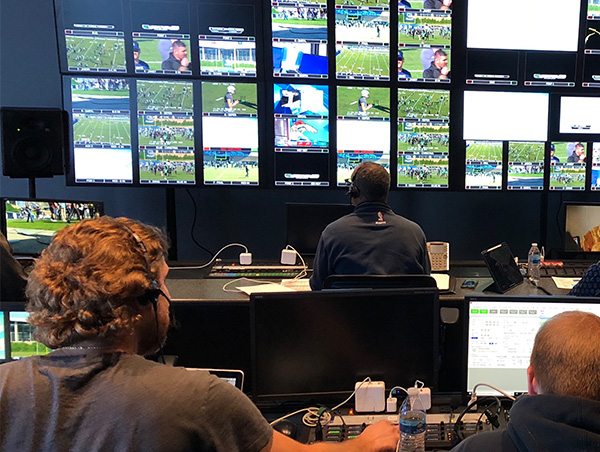 In this blog, The Switch’s Glenn Adamo looks at how remote production enables big-time broadcasters to limit costs and boost quality

With the NFL draft coming up in April, the players joining the league from the ranks of college football will be a hot topic of discussion. This past season NFL Network decided to showcase some of that next-generation talent when it picked up a weekly game for its Conference USA (CUSA) college football schedule. The result was a win-win-win for the network, CUSA and The Switch, which partnered with NFL to ensure the league made the most of the opportunity and did so cost-effectively with a remote production package.

The key for NFL Network and other broadcasters is to make any changes to the broadcast schedule like this work in an efficient way – without compromising quality. To make that happen, NFL Network teamed up with The Switch to remotely produce half the games from our Burbank studio. Onsite, NFL had its own announcers in the booth, while The Switch provided the stage manager, operators for the nine game cameras, audio assistant, video shader and utility engineers. The Switch production team in Burbank included a director, technical director, audio mixer, associate director, broadcast assistant, bug operator, and a crew of operators handling replays and graphics (scorebug and 1st-and-10 line) – as well as a producer provided by NFL.

There is first and foremost a major cost benefit to remote production – up to a 25 percent saving for NFL Network on what a traditional college football game broadcast would cost to produce. And it could be more for sports with a different set-up and levels of equipment. One of the key savings comes from avoiding a travel day on each side of the game for most of the crew – so no hotel, meals and transportation. The result with the CUSA games was we were able to do things really cost-effectively while, at the same time, achieving the high quality that NFL Network’s viewers expect.

The other critical point about remote production of games like these is not just that they are economically efficient but actually offer the potential for higher quality production, with the ability to have more camera feeds and specialty equipment (such as skycam, RF cameras, etc.). The fact is one of the challenges of doing college football games can be getting highly qualified operators and technicians that are at the first-team level you need for a broadcast by NFL Network or other major networks – in some college towns, big-league caliber crews are a challenge, so you either fly people in or make do with whatever local talent is available. With our remote production service, we are able to leverage the top-flight talent pool in the Los Angeles area, bringing in some of the best technical crew in TV to work games.

Having a core group of experienced technicians is of huge value to broadcasters as the crew knows what to expect, what to do and – having worked together on a number of high-level broadcasts such as the CUSA games – will have established great communication. As NFL Network’s Vice President of Broadcast Operations, Leon Schweir, told SVG: “I often had directors or producers come in and be amazed at the crew they had… I called it the house band because they’re always there and they’re all competent technicians.”

On game day, the crew comes in, works and goes home usually within eight to 10 hours. The result is, firstly, a really happy crew that comes to each game with a fantastic attitude and is less stressed than one that would have had to get on a plane and be away from home and family. Secondly, there is the positive environmental impact too: sending smaller crews, less equipment and fewer vehicles is simply a more sustainable approach.

The top-line benefit of remote production – saving upwards of a quarter of the cost while improving production values – is enticing enough on its own. However, it not only creates opportunities for big broadcasters looking to efficiently expand their schedules but opens the way for them, regional networks, streaming services and other players to cover niche TV sports such as surfing, karate, volleyball and lacrosse – and grow those audiences. The bottom line is remote production enables those producing live sports to adapt to changes in the marketplace with an innovation and flexibility that overcomes traditional limitations while providing a better product for viewers.

Glenn Adamo is Managing Director of The Switch Production Services

https://www.theswitch.tv/wp-content/uploads/the-switch-featured-blog-nfl.jpg 452 600 Switch Editorial https://www.theswitch.tv/wp-content/uploads/the-switch-logo-tag-white.svg Switch Editorial2020-03-10 12:22:132020-04-16 18:23:50The All-Pro treatment: NFL Network’s college football schedule shows how to take remote production and run with it
Off the shoulder: giving fans of Oscars and other awards more of what they ...

Enterprise impact: as the COVID-19 crisis stretches businesses in every way,...
Scroll to top